The vanity of evil 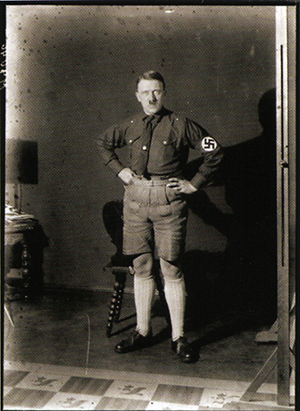 Recently I was looking at a book about the world’s most photographed people. The book was published by the National Portrait Gallery in London and is called ‘Knit Twenty Outfits for Pet Monkeys at Home’- no, not really. Obviously it’s called ‘The World’s Most Photographed’. It’s by Robin Muir.

Anyway, the inevitable chapter about Adolf Hitler had this fabulous picture of the Führer looking exactly like the totally camp and podgy old knob end he really was [left].

As the journalist Janet Flanner wrote in her 1936 profile of the dictator in ‘The New Yorker’: “Though Hitler takes the worst photographs in the world, there are several thousand of them, all different poses.” There doesn’t seem to be a proper English antonym for photogenic.  The thesaurus I have in hand just goes to “ugly”, “unattractive” and similar, which I don’t think is fair in many cases. It’s quite possible for a person to be extremely attractive, charismatic and appealing in person, yet as a still image always turn out looking like they should be lurking under a bridge waiting for goats to go trip-trapping over. Although I find it hard to be generous for obvious reasons (you know, Nazi, instigator of mass murder and genocide, stupid hair and moustache, etc. Generally not my type of guy) this may well have been true of Adolf as well. It would explain a few things, certainly.

Many high ranking Nazis who actually met Hitler or spent time in his company seemed to have what can only be called girly crushes on him. Joseph Goebbels wrote in his diary things like: “… those big blue eyes. I am in heaven” and “How I love him.”  This is the man who was one of the prime movers behind sane, respectable and decent homosexuals who had harmless consensual sex with each other being rounded up and systematically murdered in concentration camps. I can imagine Goebbels doodling “How I love him” inside a heart on his folder during meetings about the Final Solution. Ugh. Heinrich Himmler was also reported as sometimes being discovered gazing dreamily at photos he’d collected of the Führer. Again, ugh. 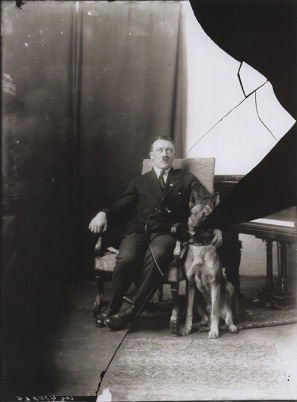 The opposite of photogenic is photoclastic, judging by this rejected, granny-esque portrait of Hitler and a dog in Munich, 1925.

Whatever the opposite of photogenic is and despite his boundless arrogance and vanity, Hitler was neurotically aware that he was indeed the very opposite of loved by the camera. Until his mid-thirties he entirely avoided being photographed to the best of his ability. He only grudgingly relented when his monomaniacal ambition had led him to the point where being photographed was an unavoidable propaganda tool but he also had enough power to veto PR disasters like the one above.

In contrast to his official, approved portraits (and belying his reputation as a media manipulator) the photos shown here depict him as a man who didn’t have a clue how or where to stand in front of a camera, no idea where he should be looking, and little consciousness of what his own body was doing. Just look at how he’s sitting in the picture to the right. This is the sort of pose I’d expect from a gawky  eight year old girl who’d been told she wasn’t going anywhere, young lady- observe the feet and legs particularly. It seems that Hitler really needed to have those thousands of photos (cf. Janet Flanner) taken, merely to stand a chance of getting a single good one.

Hitler’s nationalistic zealotry made him loathe to ditch the Lederhosen, but even he apparently thought he looked like a tool wearing them in a formal studio portrait and henceforth only got them out for his semi-private Eagle’s Nest party times.

Later he pursued and destroyed unflattering portraits of himself and the unfortunate photographers who made them with the same crazed determination he applied to vegetarianism, city planning, Operation Barbarossa (his disastrous betrayal and failed invasion of Germany’s erstwhile Soviet allies) and the Holocaust. 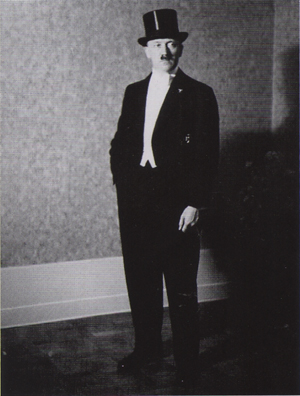 He also put the kibosh on anything similar to this absurd picture of him in a top hat and evening dress [left]. A man is beyond all sartorial hope if he still looks like a sketchy, child molesting dickhead when he’s wearing a suave costume that by the 1930s had been honed for nearly a century to make smart dressing a simple process requiring little or no imagination on the wearer’s part.

All three (mediocre at best) photographs on this page were taken by Hitler’s most favoured  and long-standing official photographer, Heinrich Hoffmann. Hoffmann seems to have been popular with Hitler precisely because he was technically accomplished but artless, basically a talentless hack with no big ideas of his own; exactly the kind of scum that always rises to the top in dysfunctional, totalitarian societies.

Hoffmann even had a room in the Berlin Führerbunker. He took the last known photos of Hitler as he forlornly engaged in one final and futile PR photo opp, pinning medals on boys from the Volkssturm.  The often repeated moving pictures of the same event were taken by another (sometimes) approved Nazi photographer, Walter Frentz. Although Hoffmann later published a revoltingly celebratory and unrepentant photo book called ‘Hitler Was My Friend’, the reason Hoffmann survived the war was that he promptly buggered off and hid at the first opportunity, knowing that his “friend” would either kill himself or meet a far worse although richly deserved fate after he fell into the hands of the Soviets.

Frentz is probably best described as amoral rather than immoral, finding Hitler’s triumphs and failures equally worthy of being documented even though this meant that his pictures usually went unpublicised. His access to Hitler led to him being approached to take part in the 1944 attempt on Hitler’s life by German officers. He declined, but also didn’t feel any need to warn Hitler about the bomb under his table. Frentz was, however, conveniently on hand to photograph the blasted room and the dazed but unharmed Hitler immediately afterwards.

It seems that despots, dictators and tyrants have always had an innate grasp of the power that images can exert when you’re in control of them, while on a personal level paradoxically having absolutely no style, elegance or aesthetic sense whatsoever. Look at the gaudy bling of Gaddafi’s luxury fortresses, his weird quasi-traditional maternity wear and his crazy message to the Libyan people with the 4×4 and the umbrella. It doesn’t even come close to making up for the misery and murder they unleash upon the human race, but in some microscopic and trivial way it’s comforting that these scumbags are so clueless that they seem not to even know how to be a normal human. We know they’re nutters and obligingly they dress (or perhaps simply mis-wear otherwise ordinary clothes) like nutters. They don’t even know how to stand like a normal human.

I’m particularly interested in this subject at the moment because I’m researching a new film and live project about the perverse, pervasive and apparently indestructible appeal of totalitarian aesthetics; the ubiquity in film, television and popular culture of Hugo Boss’ SS uniforms or derivatives of it, as seen (for example) on semi-oblivious Asian cosplayers done up as eroticised teenage Nazis, that kind of thing… more on this subject anon. I daresay there are already numerous Tumblrs of stupid and absurd Hitler photos (along the lines of the oddly mesmerising Kim Jong-Il Looking at Things), but if anybody has any particularly good/bad ones I’d like to see them.

2 comments on “The vanity of evil”