Or: The horror of Japanese beauty products

Japan is not alone and not a latecomer in being beset by vast and wasteful industries dedicated to manufacturing, marketing and selling pure products, i.e. things that serve no practical purpose other than to separate customers from their money, things meant only be bought, disposed of and then replaced with other equally pointless knick-knacks. Japan is relatively unusual, though, in the sense that it makes virtually no distinction between the matter-of-fact way it markets blow up sex dolls and the matter-of-fact way it markets consumer products that inadvertently make people look exactly like blow up sex dolls.

Say hajime mashite to the Pupeko Anti-Aging Mouthpiece (as seen on TV!), which was apparently invented by “ordinary housewife” [sic] Chikako Hirama.  You’re meant to suck and blow through the mouthpiece, and this supposedly firms up your cheeks. Um… yeah. The mind boggles and frankly I don’t even want to know how she invented this in the course of her ordinary housewifery. Ordinary for where, the red light district in Bangkok? Check out the great graphics that go along with it, though: 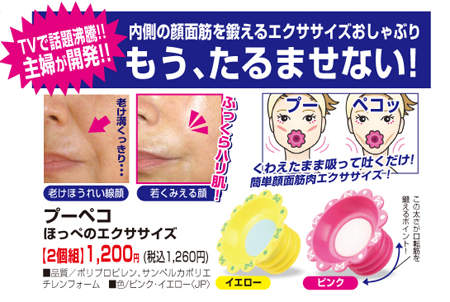 NOTES: 1. Imagine having expressive lines on your face that show how much you’ve lived, laughed and had various other emotions playing across your face… disgusting. 2. Classic Edvard Munch pose of existential horror on the far right. “WHAT THE FUCK AM I DOING?” 3. They “only” cost ¥1200 (about £10 or €12). I’m guessing there would be all kinds of widgets and attachments lying around the average person’s house that could be used to do the same thing. Oh no, now I’m thinking about how Chikako might have invented them again.

Other facial beauty gadgets from Japan and / or your nightmares include the Beauty Nose High Lift, because your nose can never be high enough, right? UP! UP, NOSE! CURSE YOUR BIOLOGICAL PLAUSIBILITY!

Mejikara Anti-Wrinkle Glasses (and more graphics I like.) Surely you’d have to keep wearing the glasses permanently if you wanted your saggy eyes to stay squeegeed out towards your ears? The model and the cartoon on the left both look like they’ve taken a candy flip rather than just wearing a quack beauty device. 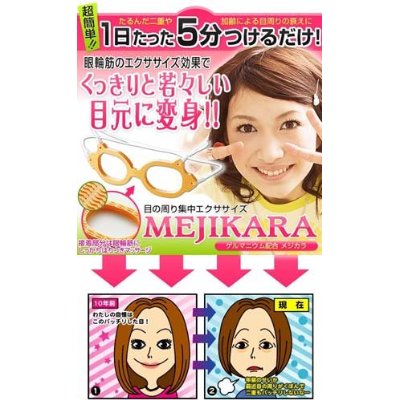 If you wore all of these products at once and outdoors in Tokyo, you could probably spark a really demented Harajuku fetish look that even the Japanese haven’t thought of yet.