Brace yourselves, nerds. This week it’s an onslaught of vintage computer images from Computers: An Illustrated History by Christian Wurster, published by Taschen. Honestly it’s so interesting and visually arresting (and virtually wordless, as the title suggests) that I could scan almost every page of it, but I’m not going to. I strongly recommend that you buy this splendid book if you like the images I’m posting, just as I suggest you do for the work of any other authors, artists, musicians, or film makers whose efforts I feature here or that you see on other blogs, and just as I also gently suggest that you support me in a small way by buying one of my books if you enjoy this blog.

Anyway, commercial message over, here’s an inexplicable image from a 1984 German ad for the Atari 800 XL. 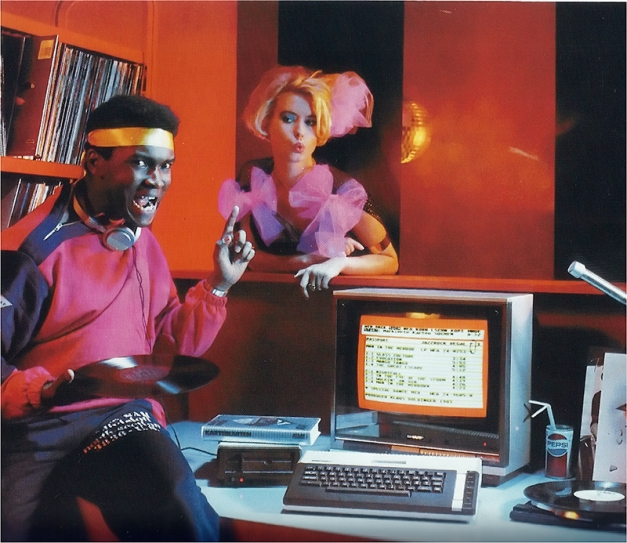 The text on the screen describes what I initially assumed must be a fictional album, since the details seemed so daft: it says the genre is “jazzrock” and the songs have stupid titles like Mango Tango. Passport was, however, a real German prog rock and (shudder) jazz rock band who did indeed release an LP called Man in the Mirror in 1983. This confirms that the gentleman pictured here really is DJing at one of the shittiest discos ever. Probably best not to even try working out what narrative we’re meant to glean from this photo. Miss Average in Pink getting short shrift and a lecture on Hawkwind when she complains that nobody wants to hear prog and jazzrock at a disco?

Interesting with hindsight that actually playing a whole song as a file directly from a digitised playlist was still far beyond the capabilities of a home computer.

Talking of discos… fusion-powered synth robo-Moroder! Presumably there are more knobs to twiddle below. Despite being a robot, Giorgio has still managed to cultivate a mighty moustache.