Some scans from The Public Notice (1973, out of print) by Maurice Rickard. It’s a gold mine. First of all, the following poster from late 1861. Despite the ambiguous grammar, they were requesting keepers for a ward of imbeciles, not ward keepers who were imbeciles. Although such terms are now used interchangeably as insults for somebody who’s acting in a way deemed stupid, until well into the 20th century “imbecile” was a respectable diagnosis meaning that a person was more functional than an idiot, but less functional than a moron. In this notice the “imbeciles” are alternatively referred to as “HARMLESS LUNATICS”, which is hardly better. Note also that these poor people (in every sense of the term) were incarcerated in a workhouse, specifically the workhouse of Bancroft Road, Stepney, in north-east London.

Also by the same authority of Mile End Old Town, the previous year, a notice of Thomas Jones who was sentenced to a month of imprisonment with hard labour for the heinous crime of “tearing up his Clothes in the Casual Ward of this Workhouse”. He probably thought that once he’d been sent to the workhouse, things couldn’t get much worse. Somebody was determined to prove him wrong.

A less depressing example of sloppy grammar from about 1900 still creates a worrying cannibalistic impression: 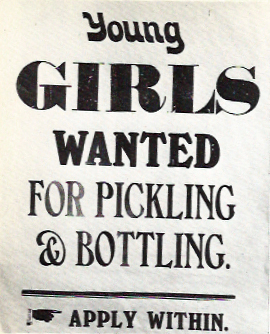 Although when you think about it this sign is also a bit depressing, since they almost certainly wanted young girls to do this horrible work because they were the only ones with hands small enough to cram into the jars. Other examples noted in the book include a pharmacy that claims “We dispense with accuracy”, “St Swithun’s School for Girls Preparatory for Boys”, “These books are made for sale, not for reading”, “If two vessels should meet in this channel, both must stop and neither may proceed until the other has passed” (imagine the backlog that must have built up on that waterway over the course of a century…), “Safety First: Do not stand on bridge”, “Animals grazing in this common without a license will be impounded” (this hardly seems fair when they’ve no pockets in which to carry their licences) and the sign below, from the Sydney suburb of Manly; a name that has no doubt been a gift to many a wag over the years. 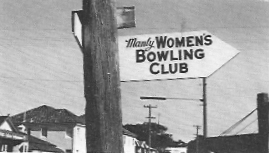