“‘Bath and slept with Gladys,’ runs one entry in the diary. Such Gill family intimacies seem routine, a habit. A few weeks later there are more surprising entries; ‘Expt. [experiment] with dog in eve’ [the rest has been obliterated]. Then, five days later, ‘Bath. Continued experiment with dog after and discovered that a dog will join with a man’”

Fiona MacCarthy quoting the diaries of Eric Gill from November and December of 1929, in her eponymous biography. Gladys was Eric’s sister.

This post is a companion of sorts to the enduringly popular one I did on Adoxoblog about James Joyce and the extremely explicit letters he wrote to the magnificently monickered Nora Barnacle. There’s something quite joyous, delightful and possibly even endearing in the way Joyce talks very dirty and explains his wild fantasies of giving it to his Mrs up the wrong ‘un, with her full and equally enthusiastic consent.  There’s a good reason why so many people find the letters so arousing, or funny, or both.

The same cannot be said of what the sculptor and typographer Eric Gill (1882-1940) was up to in roughly the same period, as revealed in Fiona MacCarthy’s biography of him. It involves incest, paedophilia, bestiality and extremely hypocritical claims to Catholic piety, so if these things are triggering to you and the quote above is already more than enough, then be warned that it only gets worse and don’t click to read the whole post. Strong language, upsetting scenes, etc.

Gill’s design influence can still be felt all over the world, and of course even more so in his native Britain. Gill Sans remains well known in all kinds of applications, including the iconic Penguin books typography, as a standard digital font installed on many computers, and in the modern BBC logo. His carvings also still adorn the Deco parts of the BBC’s headquarters at the end of Regent Street in London; a particular irony given the recent revelations that the BBC in the 1970s was a kind of free-wheeling paedotopia where a clique of light entertainment sexual predators were well-known within the corporation and for the most part tolerated because boys will be boys. The sculpture is undeniably lovely– inspired by The Tempest, the carvings of Ariel in turn inspired the title of the BBC’s in-house newsletter– but herein lies part of the problem, once you know what he got up to and how closely his artwork is tied to the sexual abuse of children and animals. As MacCarthy aptly puts it in a Guardian article about working on the biography:

“Having read Gill’s own account of his experimental sexual connections with his dog in a later craft community at Pigotts near High Wycombe, his woodcut The Hound of St Dominic develops some distinctly disconcerting features.” 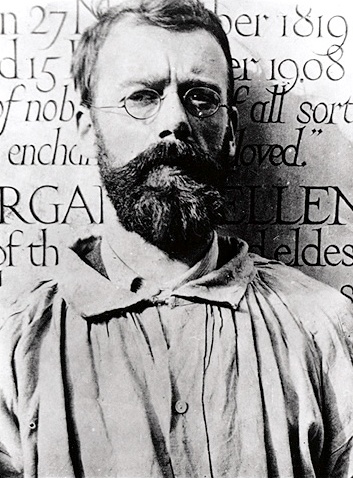 Unlike Trent Reznor who’s just showing off, sex fiend Eric Gill REALLY wants to fuck you like an animal… a dog, specifically.

Gill’s previous biographer Robert Speaight had access to the same diaries as MacCarthy, and therefore actively chose not to mention the fact that by his own admission Gill was obsessed with his penis and penises in general, that he sexually abused his daughters, exposed himself to other children, that he had sex with his sister Gladys, and experimented sexually with dogs. Gill’s wife Mary passive-aggressively opened up the possibility of Eric being found out after she sold the complete set of diaries to UCLA; Mary was definitely in on some of his three or four or more-ways (all quotes are from the diaries, via MacCarthy’s book:

There was a “quadruple relationship, with Gill’s two middle-aged-to-elderly dependants (May was in her forties, Mary now over sixty) competing with Daisy [a twenty year old youth] for his sexual attentions.

Accounts in the Diary of visits to the Gibbingses [Robert and Moira Gibbings, husband and wife] record cheerfully nude drawing, kissing, fondling. One night in late November 1925: ‘Bath after supper and dancing (nude). R & M fucking one another after, M. holding me the while’

The smocks and cassocks that Gill was often photographed wearing were part of his (almost literally) anything goes lifestyle, and conveniently doubled as a means of showing his penis to individuals who didn’t want to see it. His niece and other people stopped reacting to it and eventually just found it tiresome:

There is also the suggestion that Gill’s once-so-shocking sexiness – the ‘penis treatment’ visitors to Pigotts came to call it – was by this time verging on the boring, the banal. Indeed the sight of Gill’s male member, all too obviously visible to his young niece seeing him from floor level as he sprawled in his chair in the sitting room at Pigotts, put her off the whole idea of marriage.

So imagine– no, in fact it’s probably best if you don’t try to imagine– how “put off” one of Gill’s younger daughters was when he  “stayed ½ hour – put penis in her arse” in January of 1920, or on one afternoon in July of 1921 when he made his sixteen year old daughter Betty orgasm (and made her bring him to orgasm) just so they could watch the effect it had on their anuses: “Why should it contract during the orgasm, and why should a woman’s do the same as a man’s?” Gill’s daughters, his sisters and his male or female fuck buddies all posed as models for him. Most people would make a distinction between a consenting adult modelling for a professional artist and a father inducing his young daughters to spread their legs so he could photograph or draw them for dubious reasons, but Gill apparently did not think that way.

His interest in having men model for him was clearly not animated by any highbrow notions of art, either:

“A man’s penis and balls are very beautiful things and the power to see this beauty is not confined to the opposite sex. The shape of the head of a man’s erect penis is very excellent in the mouth. There is no doubt about this. I have often wondered– now I know.”

Gill made his (female) secretary measure his penis with a ruler in 1925. The British Museum keeps a load of pseudo-scholarly Gill studies of penises under lock and key. The studies are under lock and key, not the penises. MacCarthy describes a sheet of penis drawings by Gill, rather bizarrely shown to the biographer over tea with one owner of the penises depicted, Douglas Cleverdon:

Each item is affectionately labeled ‘self’, ‘Douglas’, ‘Joseph’, ‘Leslie’. ‘Douglas’ is Cleverdon, one of Gill’s favorite male models until Cleverdon’s possessive mistress put a stop to it. ‘Joseph’ is Joseph Cribb, for whom nude posing had become, over the years, almost a way of life. ‘Leslie’ is Leslie French, the actor, Gill’s model for Ariel on his BBC carving of Prospero and Ariel.

Particularly in his later years, Gill often thought of himself as a Christian (specifically a Catholic) and a man of good faith. I’m sure most of us don’t need much help to join this up to the relatively recent revelations about decades of child abuse by priests, but “never trust a man who wears a cassock” doesn’t seem a very useful lesson to take away from all this. Whether we are Christians or not, perhaps we should all give some thought to whether the weight of our good deeds and achievements in the world justify the wrongs we perpetrate, or tacitly endorse by inaction.