Why we have health & safety regulations nowadays

More images from Magic: Stage Illusions and Scientific Diversions, Including Trick Photography (1898). Today we’ll be looking at some terrifying ways in which our great or great great grandparents let their hair down at fairgrounds and theatres, and possibly also had their hair set on fire or torn out by the scalp. Don’t try any of these at home, because even if you really do want to die there are better ways to go than being electrocuted by an artificial horse. 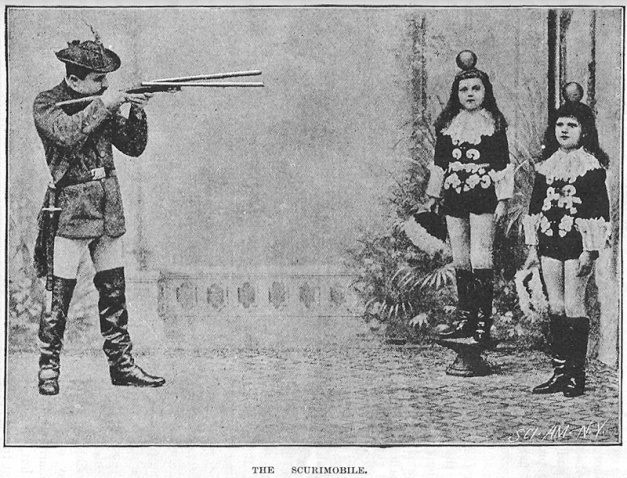 “The peculiar gun shown in the cut is named after the inventor, Alessandro Scuri, of Liège, Belgium. M. Scuri is also known as the inventor of a unicycle and a quadruple cornet. The “scurimobile” is a gun with two barrels which can be aimed at different objects, the angle between the barrels being adjustable… in the cut the inventor is shown aiming at two balls aimed about a yard apart.”

The book neglects to mention what we can see for ourselves in the cut: M. Scuri is aiming at two balls balanced on the heads of children. Let’s hope he didn’t do William Burroughs’ headshot version of “the old William Tell routine.” Note also that the image has been reproduced from Scientific American, testament to the fact that back then dressing up like William Tell and inventing a gun capable of blowing the heads off two children at once was no barrier to scientific respectability.

“Genuine spiritual séances fail in most cases, as well known, because the spirits are in an ill mood and disposed to be coyish. The following will prove a scene sufficiently weird to put the most intrepid worldlings in a flurry if some of our friends takes it into his head to give them the mysterious spectacle thereof before they have read an exposure of the trick.”

“The current that produces the X rays is led into the Crookes tube by wires. The objects designed to become luminous are placed as near to the tube as possible. In the experiment under consideration a diner (who is doubtless near-sighted, since he wears eyeglasses) is about to do justice to his breakfast. Armed with a knife and fork, he attacks his beefsteak; but he is assuredly a greater eater than drinker, since he contents himself with water, while his light consists of a single candle.

A black curtain on the other side of the table conceals from the spectators a skeleton covered with zinc sulphide.

Let us now put out the light and set the Ruhmkorff coil in action. What a surprise! A plate, a glass, a water bottle, and a candle shine in space with the light of glow-worms.

A sinister guest in the form of a skeleton sits opposite the place occupied by the near-sighted gentleman, who has disappeared, and whose eyeglasses alone have held their own before the ghastly apparition. Finally, to complete the illusion, hands are seen moving over the heads of the spectators, and those multiply, and then disappear, only to appear anew.”

“The X rays pass through the black cloth on the door that conceals the Crookes tube and also through the body of the gentleman, and render luminous the glass objects covered with zinc sulphide. As for the mysterious hands, those are simply gloves covered with the same substance and fixed to the extremity of long sticks that are moved in all directions by confederates.

Such scenes may naturally be varied to infinity; and the spirit of invention is so fertile, there is no doubt that before long ladies will be giving a place in the programme of their soirées to this up-to-date spiritualism.”

The gentleman and most of the ladies died of cancer shortly afterwards. What larks.

India rubber suction cups on the feet, walking on a “perfectly smooth board”. The text reassures us that “the power of the disk to sustain the weight of the performer may be easily calculated” although it also allows that “the performer has frequently fallen, but so far no serious accident has happened.” Love that “so far”. 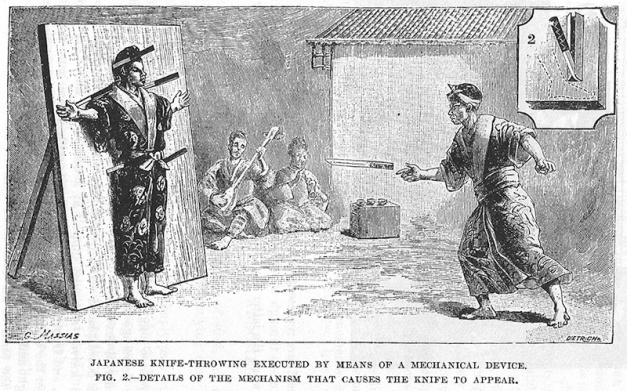 Japanese knife-throwing executed by means of a mechanical device.

Maybe it was naive of me, but I was genuinely surprised to find that you don’t really throw knives at a person in the knife-throwing trick. More accurately, the knives do get thrown but they’re thrown past the board (and the assistant) and not into it (or the assistant). I strongly advise you not to do this trick at all, but if you are trying to do it and you’re wondering why there’s so much blood all over the place… there’s your reason.

“Whatever may be the opinion that is held as to horse races and their moral influence, it is none the less certain that they offer an irresistible attraction to a large number of persons… a twelve-horse-power gas engine actuates a Rechniewsky dynamo with double winding, which sends current into six electric motors.” 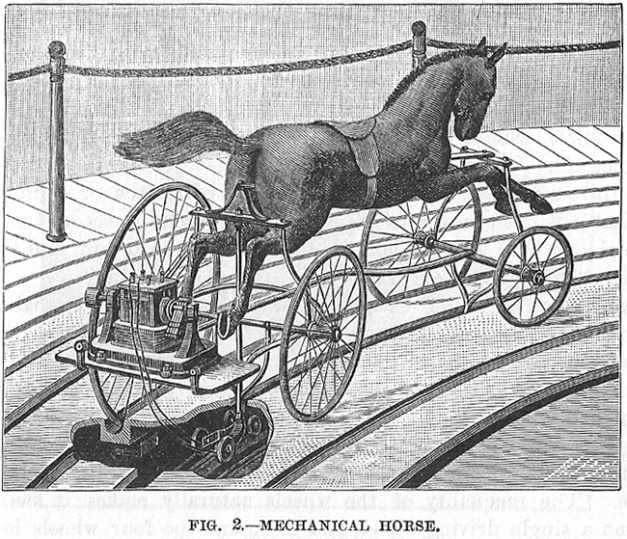 “The mean speed is thirteen feet per second, but the horses placed at the circumference can obtain a speed of sixteen or eighteen feet, a velocity that it is not prudent to exceed, or even reach, on account of the difficulty the rider would have in holding himself in equilibrium, and the feeling of dizziness that he might experience.”

“The supreme happiness of sitting in a swing which apparently whirls around its points of support, giving the occupant what is most properly described as a new sensation, may now be enjoyed by all.”

The secret is that the swing is more or less stationary, but the room itself rotates around the passengers. All the furniture and fittings are fixed to the walls or floor. The book mentions stage hands pushing the room manually from the outside, doubtless providing some excellent opportunities for crushing injuries and concussions.