What’s that? You never heard about this carnival of homosexual, bisexual and transvestite animals? (That I just made up.) So sad… some people have a sheltered upbringing. Because there are definitely gay and, yes, even intersexual or transvestite animals throughout the world and there always have been. Sorry about that, bigots and religious nuts, but to adopt a phrase already in circulation: DEAL WITH IT.

It’s documented in thousands of scientific papers, even though a shameful number of scientists themselves have not been averse to clutching their pearls and squeamishly claiming not to see what their own data unequivocally shows. In 1999 Bruce Bagemihl did the world a great service by compiling and summarising this evidence for the ubiquity of non-reproductive (hetero- and homo-) sexual practices throughout the natural world in his mammoth 750-page Biological Exuberance: Animal Homosexuality and Natural Diversity. It’s an exploration of possible evolutionary and biological explanations for the fact that a spectrum of sexual behaviour and gender identity exists in almost every species; a far cry from the scientifically and logically unsupportable view that a heterosexual majority means any individual with a different sexual or gender identity is therefore abnormal. It’s not always even true that the majority of individuals are heterosexual in some species. I don’t know why I find it so funny, but Bagemihl’s deadpan assertion that “the majority of male manatees are probably bisexual” always cracks me up. Many other animals have far more sex with their own gender than they ever do with heterosexual mates, as we shall see.

The book also doubles as a methodical but weirdly entertaining catalogue not only of real-life and empirically confirmed bi-curious manatees, but also of lion benders and gay ostrich dance clubs. I’ve picked out a few and I’ll be posting them during Gay Animal Fortnight alongside the other random stupid stuff.

Let’s start Gay Animal Fortnight with our cousins, the sex-mad Bonobos. If you’re offended by descriptions of sexual acts between (mostly) consenting animals… well, firstly you’re weird and you’re probably projecting your own hangups rather than genuinely seeing anything shocking. You should just relax a bit. This is the blog where James Joyce’s jaw-droppingly dirty letters reign supreme, after all. But if you know you’re offended by this kind of thing, then just don’t read any further.

Bagemihl provides a cute little grid of options for each species in the book, which it’s difficult to reproduce here. I’ll follow his typology but just provide them as a list. The options are Homosexuality: Female, Male Transgender: Intersexuality, Transvestism Behaviours: Courtship, Affectionate (i.e. what would be called in humans homoerotic or homosocial activities), Sexual, Pair-bonding, Parenting Ranking: Primary, Moderate, Incidental (this informally describes the apparent importance and/or prevalence of non-heterosexuality or variant gender identity in the species. Although for comedy purposes it’s tempting to use it as a barometer of just how gay certain animals are.) Observed in: Wild, Semiwild, Captivity.

Bonobo communities in Central Africa are mixed-sex and mixed-age groups of up to 60 individuals. Females usually move to a new group when they become sexually mature. Males tend to stay where they were born. Females bond strongly with one another in groups or in mentor-protégée relationships, they take most responsibility for raising offspring, and they are generally dominant over males. Sex is extremely promiscuous. Females particularly enjoy GG (genito-genital) rubbing with each other, directly stimulating each other’s clitoris. It’s been suggested that female bonobos’ genitals may even have evolved for lesbian purposes rather than primarily for heterosexual intercourse. I like that phrase, “lesbian purposes.” There are also lesbian porpoises, but that’s another post.

Virtually all Bonobos are bisexual. Females seem to prefer lesbianism, but they sometimes use sexual invitations as a way of getting food from males. Apparently this tends to annoy the males and it puts them off straight sex for a while. 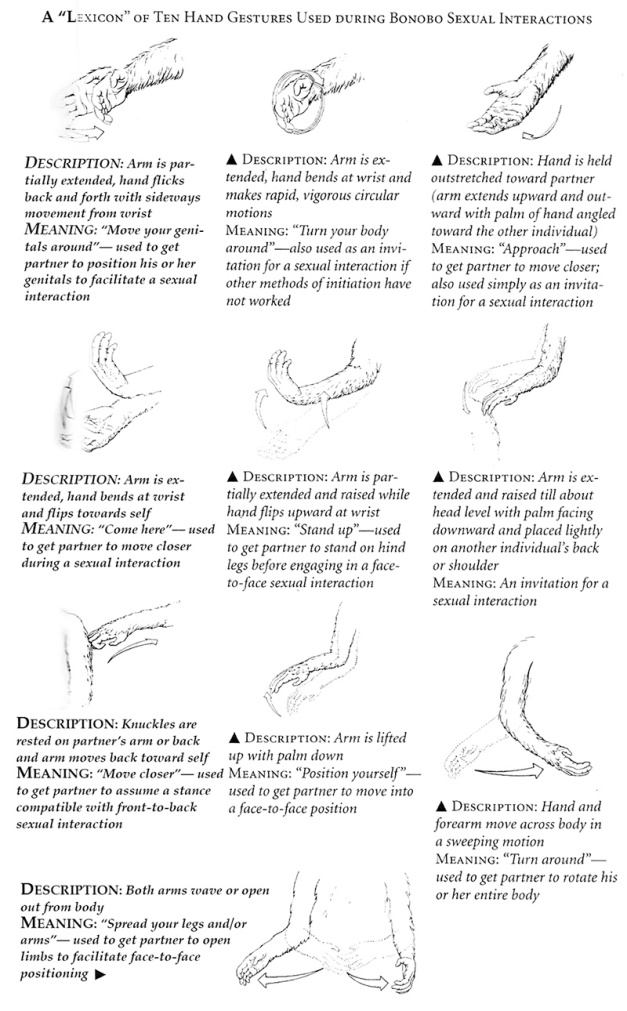