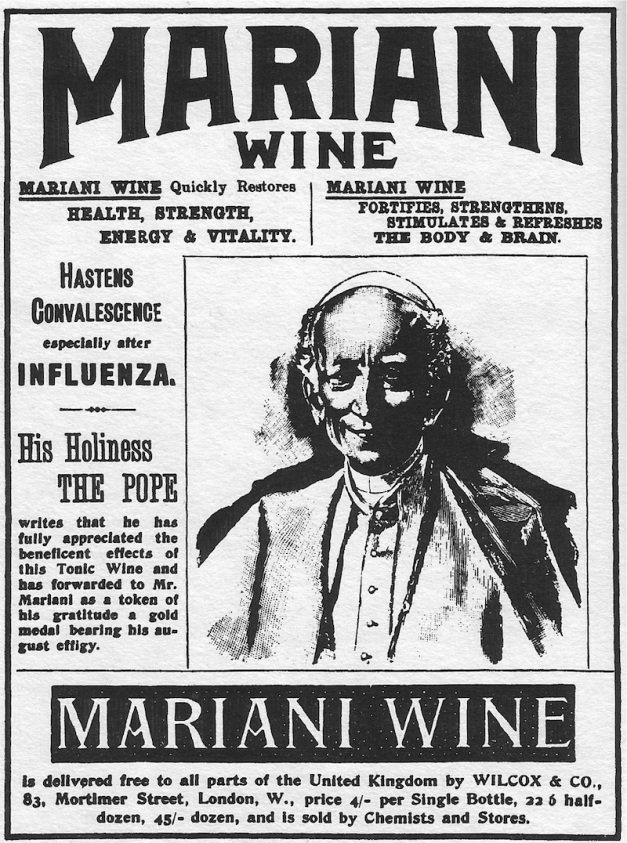 An endorsement by His Holiness the Pope from Graphic, 1899, for Mariani Wine. Leo XIII was Pope from 1878 until 1903 and he had a ticket to ride on the white line highway. The product was pretty much just coca leaves steeped in ethanol, with about six or seven milligrams of cocaine content per fluid ounce. So when the advertisement says Mariani Wine “fortifies, strengthens, stimulates and refreshes” they’re probably right, albeit in a not strictly medicinal Studio 54 style. Other celebrity Mariani space cadets included H.G. Wells, Jules Verne, Henrik Ibsen and Thomas Edison.

As funny as it seems now, until after the First World War substances such as cocaine, Heroin, laudanum (opium dissolved in alcohol) and Chlorodyne (laudanum, cannabis and chloroform) were widely available to all and sundry, children included. There were ads recommending Heroin as a cough medicine, and laudanum as a remedy for a baby’s teething pains. The effects and potential damage done by abusing these drugs was generally well known, but most Western societies seem to have either trusted themselves or just not cared. There weren’t really any drug dealers and attendant criminality because there was no need. You could just walk up to your local pharmacy. Something for the “War on Drugs” advocates to think about.

PS: The Victorian building of Wilcox & Co. at 83 Mortimer Street is still there, in the heart of London not far from Oxford Circus and BBC Broadcasting House, although it’s now occupied by the kind of crappy, grimy, depressing little shops that are a London speciality.