Hiding in public, part one 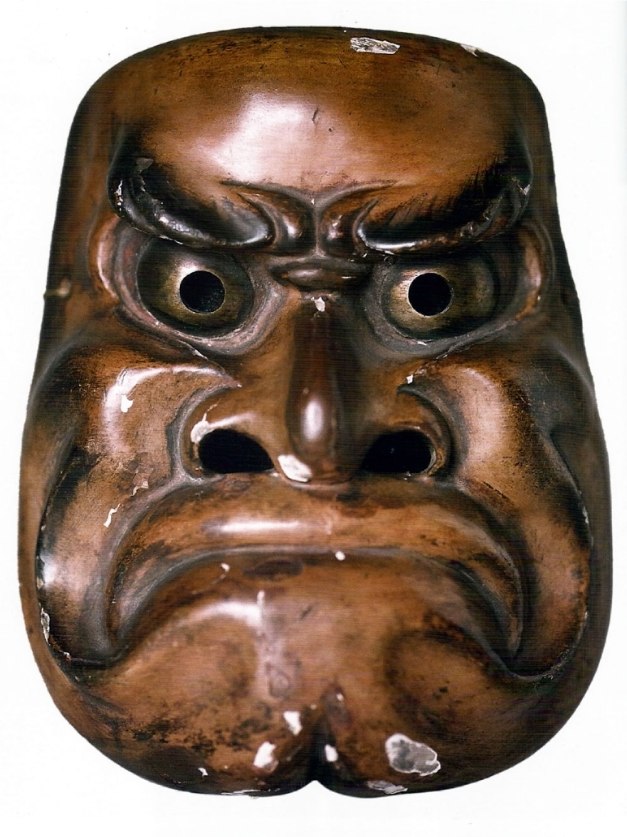 A few months ago I visited the very inspiring Musée du quai Branly in Paris. I recommend it to anybody who is interested in anthropology or ethnography. Or disconcerting masks and dolls, because they have tons of those. They’ve published a great book called Masks: Masterpieces from the musée du quai Branly. The text is by the splendidly named Yves Le Fur, with photos by Sandrine Expilly. I’m going to reproduce a few scans, but the book is worth a look if– as mentioned previously– you’re one of those creepy mask people like me. I’ll also be sharing some of my own photos from the collection. All the ones by me will be clearly marked, otherwise credit goes to Expilly.

This time I’m concentrating on Noh (能) masks from Japan. Noh is the extremely formalised theatre that originated in Japan about seven hundred years ago. Some of the masks are used to play different characters from the repertory. A few are cleverly designed to change their expression depending upon the direction of lighting or the angle of the performer’s head. These masks are usually treated with great respect by the performers. The Obeshimi mask above is used in five different plays. Mostly it is used to represent a demon, but it can also play Dairokuten, one of the ten kings of the hells.

Yase-otoko is a vengeful spirit, or a dead man suffering in hell for his sins in life.

Okina is the incarnation of a god in the body of an aged, smiling man. This mask, like the Obeshimi, is actually even older than the Noh plays, but was partially absorbed into them.