Changing the world, even when you fail

Alejandro Jodorowsky and the glory of not getting what you want 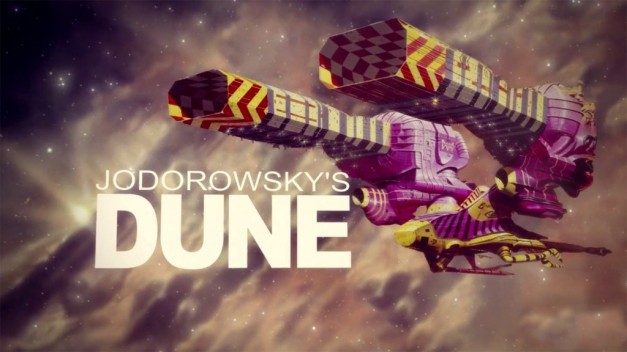 Frank Pavich’s Jodorowsky’s Dune is a confusing phrase, but the documentary itself does absolutely everything right in terms of a compelling story, an incredibly charismatic protagonist, and a genuinely inspiring and uplifting message. Alejandro Jodorowsky is the bonkers auteur who made surrealist cult films like El Topo and The Holy Mountain with a mentality more akin to a prophet or a cult leader than a film technician, so it’s no surprise that he was drawn to Frank Herbert’s zeitgeisty eco-messianic novel. If Jodorowsky is any kind of prophet then he’s the Anti-Hack. For him it’s all about the passion, the politics and the image. Making perfectly constructed emotion-manipulating and money-making machines is not interesting to him at all. For a while in the 70s there were so many serendipities raining down onto him that it seemed the universe wanted Jodorowsky to make Dune, and it would brook no contradiction. It’s also depressingly inevitable that a dementedly overambitious project by an idiosyncratic and unapologetic genius like Jodorowsky would fail to thrive in Hollywood’s sterile earth.

This film about the abortion of another film reveals what a magnificent thing Dune could have been. Seventies sci-fi painter Chris Foss designed space ships and buildings. French comic artist Moebius designed the characters and costumes. The villainous, genocidal Harkonnens were styled by H.R. Giger, later famous after he was poached by Ridley Scott for production design on Alien. The grossly obese and megalomaniacal Baron Harkonnen would have been played by– who else?– the grossly obese and megalomaniacal Orson Welles. It’s both hilarious, typical and tragic that Jodorowsky failed to tempt Welles with money, but immediately secured a “yes” when he promised food. Salvador Dalí was to be the Emperor of the Galaxy (for about two or three minutes, because he wanted to be paid $100,000 a minute). Mick Jagger was on board, playing an androgynously beautiful version of the role that eventually went to Sting in David Lynch’s version. Imagine that as a casting session: who’s the best actor, Jagger or Sting? It’s like, do you want to eat the rotten wormy apple or the rotten maggoty orange?

It seems Frank Herbert was happy with whatever changes were necessary, up to and including the random addition of giraffes to the plot. This was Dalí’s idea, obviously. Jodorowsky’s characteristically and exuberantly un-PC analogy, however, is that he was raping the book rather than adapting it, but in this as in most other things he’s completely right. How many adaptations, updates and reboots have we all seen that were nerdily faithful in all the superficial aspects that didn’t really matter, but betrayed everything that made the original so beloved in the first place?

In this context the most obvious example of bad adaptations is course David Lynch’s version of Dune. I can’t do better than David Foster Wallace’s evisceration of it:

“Watching Dune again on video you can see that some of its defects are clearly Lynch’s responsibility, e.g. casting the nerdy and potato-faced Kyle MacLachlan as an epic hero and The Police’s resoundingly unthespian Sting as a psycho villain, or – worse– trying to provide plot exposition by having characters’ thoughts audibilized (w/ that slight thinking-out-loud reverb) on the soundtrack while the camera zooms in on the character making a thinking-face… The overall result is a movie that’s funny while it’s trying to be deadly serious, which is as good a definition of a flop as there is.” David Foster Wallace, A Supposedly Fun Thing I’ll Never Do Again.

Wallace also points out that many other incoherencies and absurdities are strictly down to the meddling of executive producer Dino Di Laurentiis, Dino’s daughter and various other executive know-nothings. This is corroborated by various other people, including Lynch himself. He has always (sensibly) disowned the film as it was released. Some versions even went out credited to Alan Smithee, the Hollywood film director’s ultimate act of divorce from their own work. Even more interestingly, in the same essay Wallace states that Lynch used his total surrender of final cut rights on Dune as a bargaining chip to get the outstanding Blue Velvet made with the Di Laurentiis company’s support but none of its interference. Over time I’ve mellowed in my opinion of Lynch’s Dune. There’s no doubt that some of its grandeur, weirdnesses and evocations of the distant future are impressive. Portentously intoned lines like “Your water shall mingle with our water” will never evoke anything to me but standing at a urinal, though. I saw a revival of it at a cinema in the 90s, and the audience howled with laughter at lines like this.

From where I don’t know, but I seem to remember Mike Hodges telling a similar Di Laurentiis story with regard to Flash Gordon. Di Laurentiis apparently thought the film was a serious piece of work, and courted directors like Fellini and Roeg to helm it. Both declined the honour. Director Hodges, screenwriter Lorenzo Semple Jr. (with daft camp already on his CV thanks to the 1960s Batman TV series), and the principal non-US cast (Timothy Dalton, Max Von Sydow, Topol, Peter Wyngarde, Richard O’Brien, and last but never knowingly upstaged, Brian Blessed) all got that it was a fun, über-kitsch mockery of silly source material, and played it that way. Di Laurentiis conversely seemed immune to irony, absurdity or camp, and gave his notes on the production accordingly. Flash himself was picked up from a TV dating show by one of the Di Laurentiis clan, and derisively treated like the eye candy he was by Hodges.

Far from being insane, impractical or unreasonable, Jodorowsky comes across as quite a wonderful person, a great storyteller, full of humour, self-awareness, passion and wisdom. He gathered collaborators to him with a generosity, respect and intensity that they obviously appreciated for ever afterwards. Just when you start thinking there might be nothing much wrong with him apart from being a bit nuts, the film judiciously drops in his gleeful and very funny schadenfreude about the failure of Lynch’s film. From this point on it also becomes clear that even in his eighties he’s still righteously, deeply hurt and angry about the way he and his dream project were treated. The immense and magnificently illustrated volumes containing scripts, full storyboards, production designs and FX breakdowns circulated to all of the Hollywood studios, who all turned it down… then promptly all set about secretly cannibalising it and nicking its staff, designs and concepts for other films, as is convincingly laid out in the documentary.

What comes through most strongly, though, is that in a way the film’s failure to materialise as an actual product is totally beside the point. With the man himself as our guide, we learn that Jodorowsky’s Dune changed his life and many other people’s lives. The things he and they learned are still with them. Creative connections and unlikely friendships were made that bore fruit elsewhere, for many years. Not even failure can detract from the vision, pride and creativity of the extraordinary people Jodorowsky assembled. Maybe it’s because I’m a writer and film maker myself, but I left this film with a great sense of hope.

The documentary is out now on disc and for streaming, and I thoroughly recommend it to anybody with an interest in film making or the creative process in general.