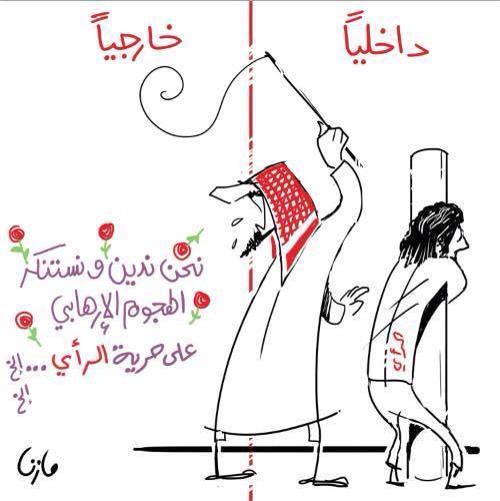 While millions of ordinary people marched the streets of Paris (and throughout France and the rest of Europe) to show solidarity with each other and with the victims of the necromaniac terrorist attacks there last week, they were joined by some extremely rum, opportunistic and unconvincing Charlies like Turkish Prime Minister Ahmet Davutoglu (who has presided over a dragnet approach to arresting independent or critical journalists in Turkey), Sergey Lavrov the Russian Foreign Minister (cf. Pussy Riot imprisoned for offending the church, “promotion” of homosexuality banned, opposition politicians convicted of trumped-up charges in a climate of repression against the very idea of a free press) and Ali Bongo, the president of Gabon who has journalists threatened and arrested for exposing his own corruption and that of his family. Not to mention the usual chickenhawks, particularly in the USA and UK, who are immediately and automatically taking advantage of the situation to squawk that the answer to an attack on free speech is less freedom and less speech. Nobody can attack what isn’t there, right?

Also present was Saud bin Faisal bin Abdulaziz Al Saud, Foreign Minister of Saudi Arabia since 1975. On the 9th of January 2015, before the final rounds had even been fired during the dual hostage crises unfolding in and near Paris, the Saudi authorities had hauled out blogger Raif Badawi to be flogged in public for the so-called “crime” of running a left wing website that advocated freedom of speech. Free Saudi Liberals is now, unsurprisingly, defunct. He’s been sentenced to ten years in prison, 1,000 lashes and a fine of 1 million Saudi Arabian riyals for encouraging debate and for supposedly insulting Islam. He narrowly avoided a conviction for “apostasy” [sic], which carries the death sentence. They vindictively imprisoned Badawi’s lawyer for fifteen years, too. It’s not as bad as being murdered for speaking your mind, but being taken out and whipped for it is definitely on the same spectrum of barbarism. And to be absolutely clear it’s the government, the House of Saud and their ilk, who I’m accusing of medieval barbarism here and not the people. The fact that governments in the Arabic world are coming down so hard on the population proves that the people themselves have a consensus for progress, tolerance and secularism that threatens and frightens their unelected rulers.

The World Muslim League, who harassed Charlie Hebdo despite a court acquitting them of the (absurd) charge of “offending muslims” by pressing on with their own private prosecution even after the Paris Grand Mosque dropped it: Surprise! They’re based in Saudi Arabia. Many other activists in Saudi Arabia and elsewhere in the region have been persecuted, exiled or imprisoned for political activism or simply for expressing an opinion. The governments of these countries unanimously hate social media, Skype and even the mildest criticism or dissent. And yet the likes of Al Saud or Lavrov have the brazen bloody cheek to walk beside the families of the murdered and the millions marching for freedom of speech, for unity and for the tolerance that’s necessary when somebody uses free speech to say things we don’t agree with and don’t like or– worse still– that make us face up to our failings. As I’ve said many times, the easiest way to avoid being told you’re a scumbag, an arsehole or a monster if you don’t like it is just to behave better and stop being a scumbag, an arsehole and a monster. Shutting down a conversation is much more bother than simply letting people talk.