“Your bobo is ripe and full, how wonderful”

Or: What the captions say on Hokusai’s ‘Dream of the Fisherman’s Wife’

Warning: sexiness. Well, in my view totally hilarious rather than sexy. The two things can of course coexist, but in this case I’m declaring my personal preference for the hilarious interpretation. I think James Joyce’s letters to his Mrs are also lurking somewhere in that particular no (wo)man’s land. My article regarding old Jim’s fat mickey and what he’d like to do with it is still one of the most popular posts I’ve ever done here, along with the one about Japanese manga onomatopoeia, so when I was inspired to research the book that this famous print comes from it immediately became clear that I should share my findings with the perverts who visit this site. Edo sex onomatopeia! Bizarre erotic material! Japanese stuff! It hits all the blogging G spots.

The print generally known in English as The Dream of the Fisherman’s Wife is in Japanese simply 蛸と海女, Tako no ama (Octopus and Shell Diver). I’m a long way from being Mr Politically Correct, but right there we’ve got what seems to be a glaring piece of casual Western imperialist sexism, since she might well be somebody’s wife but the most salient fact is that she’s actually a fisherwoman in her own right. It’s not even an accurate description because the fisherman isn’t part of this scenario. Presumably his presence would impede this young lady’s hook ups with such fine specimens of cephalopod manhood as are shown here. It’s the kind of a work-related fling that happens when your colleagues are mainly molluscs.

Katsushika Hokusai, he of the iconic The Great Wave Off Kanagawa, also worked openly and to equal acclaim, popularity and prestige on erotic prints (春画 shunga) like the one under discussion here. This particular print is from the novel Kinoe no Komatsu (Young Pines, 1814), a title which is probably as euphemistic as calling the whole thing a novel; I should imagine if it has any novelistic qualities at all it would still be the kind of novel you’d read with one hand. For those who don’t know already, the print depicts a naked woman in a consensual sexual encounter with sea creatures. If you’re on the front page, clicking READ MORE (or whatever it says above the break) will show it to you. Don’t click the link if you or your employer are not inclined towards enjoying things like that. It’s visible on the wall in the background of my current profile picture on my own website, among other places, to the outrage and disgust of absolutely nobody. You’ll probably see worse by accident when you Google something you’d previously thought was innocent (I know I have)… but whatever, those who need warning should consider yourselves warned.

END_OF_DOCUMENT_TOKEN_TO_BE_REPLACED

No Figment of the Thing That dazzled, Yesterday 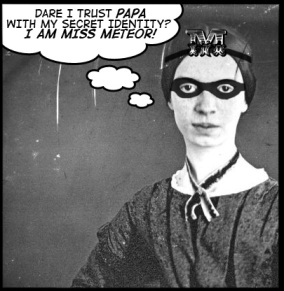 I made this picture of Emily Dickinson. I can only apologise.

In which I manage to discuss the poetry of Emily Dickinson, cosmic horror, Superman, Morrissey and Steve McQueen without exerting myself unduly.

Recently I was perusing a laughable book about- well, it’s hard to say exactly. Just sort of general things that might be called inexplicable or mysteries if anybody actually gave a shit about them or they weren’t clearly the result of somebody suffering from a bout of delirious, drunken stupidity or mental illness. Like Fortean Times, but even more random. Is there a turkey in the Bayeux Tapestry? It’s not really a mystery if nobody cares about the solution.

It’s the sort of book that usually costs a few pounds in a remainder shop, or is for sale in what my esteemed colleague Kid Carpet calls Mystical Shit shops (Seriously, I am a huge fan of Kid Carpet. Download his song Mystical Shit for a start), alongside dream catchers, rag rugs and crystals to unbung your chakras. My local library has loads of these books, for some reason. And a very comprehensive  but never used section on things like irritable bowel syndrome, drug induced psychosis, anorexia and whatnot. For obvious reasons I’ve never made any effort to befriend the librarians.

Anyway, there was one interesting thing in the aforementioned book: an account of some strange jelly that apparently fell out of space in 1819 and landed in Amherst, Massachusetts. It seems not to have occurred to the author that this (at the time very small) place was the lifelong home of the poet Emily Dickinson and her family, although she wasn’t born for another 11 years. END_OF_DOCUMENT_TOKEN_TO_BE_REPLACED