Eyes without a face

Photos by Sim Chi Jin, except #3 which is from Reuters.

“A woman should always have fair skin, otherwise people will think you’re a peasant.”

The top picture is just the best. So surreal. Is it a balaclava, a ski mask, a facekini? Whatever you call it, it’s a weird and slightly terrifying item of apparel that is actually worn in China, on the beach at Qingdao especially. It’s the latest offshoot of the Nosferatu mania that many women in China have for keeping out of the sun. Even in London, where we count ourselves lucky to even see the sun for more than a week out of every year, you can spot Chinese tourists by their massive hats and the objects that they hold up above their heads the very instant they sense any danger of unduly numerous photons ravaging their skin.

As this New York Times article says, sun blocks and skin lightening products are big business in China because the resurgent middle classes, the children and grandchildren of cadre fat cats, and the nouveau riche plutocrats have fiercely re-established and amplified the traditional association of brownness meaning a life in the fields or otherwise labouring outdoors (i.e. being a peasant, of whom there are still hundreds of millions in China) and paleness with a bourgeois or upper class lifestyle.

Even people in dreary Britain need to think about not baking themselves and wearing sunscreen where necessary because skin cancer is no joke, but in China their attitude towards sunlight is pathological. I’ve experienced it first hand, having lived and worked in China on several occasions*. I think the most telling part of the article is a woman who snubs the masks as “way over the top”… while sitting under an umbrella, wearing a sun hat, sunglasses, a surgical mask, gloves, a long sleeved shirt, and with another shirt draped over her bare legs. Nobody does cognitive dissonance or making a fun activity into a chore like the Chinese.

* In 2006 I spent a considerable amount of time living and working in Qingdao. It’s a former German colony about halfway down the coast between Beijing in the north and Shanghai in the south. If I was these ladies, I’d worry less about getting a bit brown and worry far more about the horrible, ugly, polluted and rubbish-strewn beaches, the toxic sludge that passes for open water in a country where sewage and industrial byproducts are regularly dumped with impunity, and the city’s ever-present smog. Also, hardly anybody in China knows how to swim properly and wearing a balaclava isn’t going to help (the NYT article mentions this fact, too). If you like, you can watch the film I made about the school I was working at, and the city of Qingdao which is a pretty weird place. My experiences in China are also described in my book, Career Suicide. 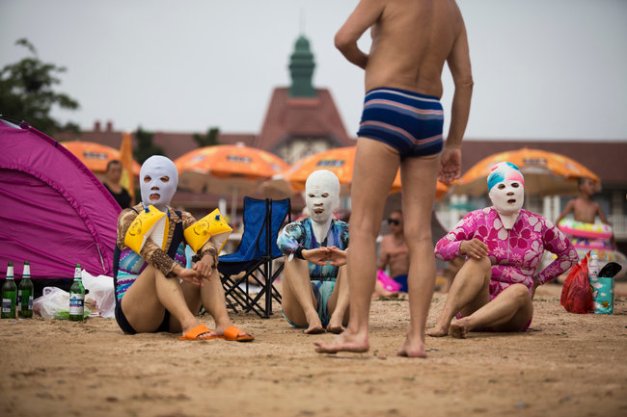