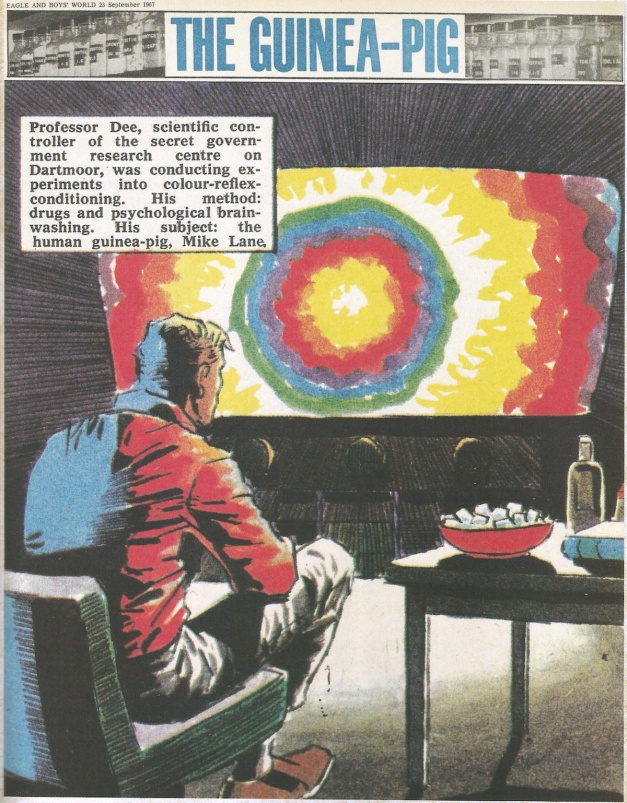 Just two more images I scanned from the old British boys’ magazine/comic Eagle, posted here very belatedly purely because I just found them on an old HD and I don’t know why they never got published.

Coincidentally, the “colour-reflex conditioning” to which Mike is being subjected (above) looks very much like the Zoom ice lolly being advertised below. It’s like he’s being frontally aggravated by the business end of a massive Zoom lolly, which can happen when you’re tripping your tits off like young Michael here. Mike Lane = Migraine?

Perhaps some of those special sugar cubes on the coffee table made their way into the Lyons Maid factory. It might explain where they got the idea that being Commander in Chief of the Galaxy Patrol would be fab. Only Zoom fans are in it, baby. Fab was (and I think it still is, in Britain) another ice lolly, by the way.

I also love the delightfully gauche and virtually meaningless “New Zoom is great” as a marketing line. Product is great. It just is. 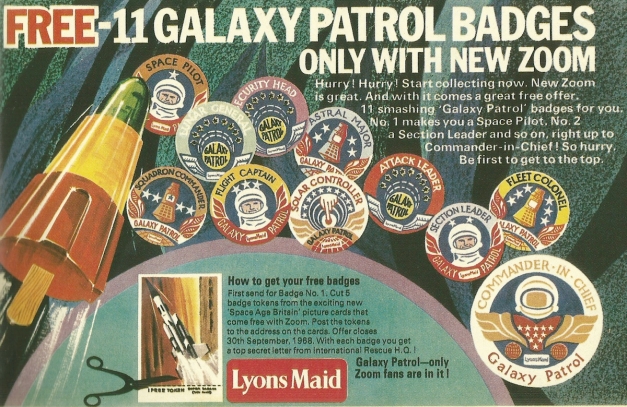 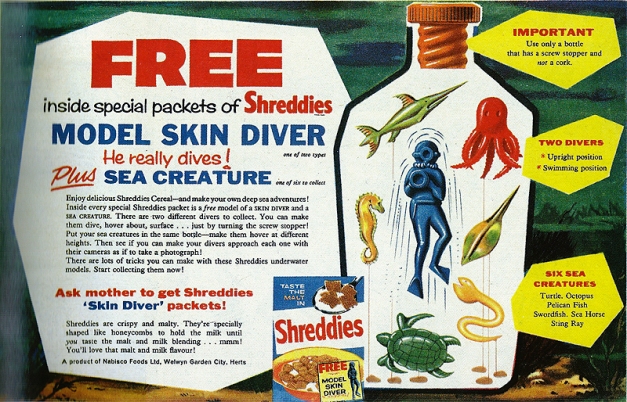 I’m sorry boy, but you do manage to look ludicrous when you give me orders.

No! I will not hide in the fruit cellar! You think I’m fruity, huh? I’m staying right here. This is my room and no one will drag me out of it, least of all my big, bold son!

Norman! What do you think you’re doing? Don’t you touch me, don’t! Norman! Put me down, put me down, I can walk on my own… 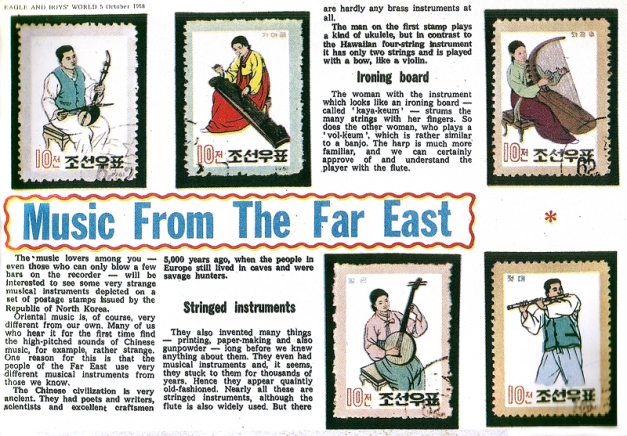 Eagle‘s slightly suspect enthusiasm for all things Eastern Bloc and totalitarian (holidays in Leningrad, etc.) emerges yet again, this time in an article about North Korean postage stamps that somehow takes in “gosh, how exciting” and “silly foreigners” at the same time. The two subheaders being “Stringed instruments” and “Ironing board” demonstrates this duality quite well.

Eagle also once did a quiz so young boys could find out for themselves how much like Kruschev they were.

I DO NOT APPROVE OF OR UNDERSTAND ANY KIND OF UKELELE.

From an advertorial by Meccano Ltd. (makers of Hornby-Dublo trains and Dinky toy cars) in Eagle, 1960.

Am I the only person disturbed by the way this robot barges in with HALLO, THERE! and then proceeds to answer “interesting” questions about things like Walschaerts’ valve gears, questions that no normal person would ever ask?

Maybe it’s just because I’ve actually met humans who do exactly the same thing, and who don’t have the excuse of being a robot from the 1960s. 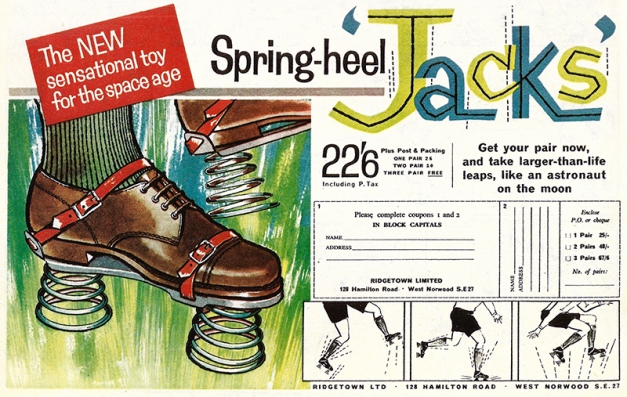 People nowadays complain a lot about health and safety regulations, but really… would you want your child or anyone who was near to your child taking “larger-than-life” steps in these? Nothing could be further from the space age and from being “like an astronaut on the moon” than two industrial springs welded to the bottom of crude (and probably razor-sharp) metal plates, held on with what look very like cat collars if the illustration is at all accurate. Oh well, at least in Britain the spring-heel ‘Jacks’ may have cost you 22’6 and possibly the use of your legs, but the trip to the local Accident and Emergency department was free!

Somebody was evidently thinking of the Spring-heeled Jack of popular Victorian culture, as seen in the Penny Dreadful cover above. From a few relatively restrained reports in and around London in the 1830s of a weirdly costumed pervert who leapt away and disappeared rapidly, Spring-heeled Jack quickly spun off into popular fiction, folklore, mass hysteria and numerous copycats. In the 21st century we’d say he went viral, and in the process he grew claws, wings, glowing eyes, skin-tight clothes, the ability to breathe out strange gases or fumes, and other typical attributes of a malevolent folkloric figure.

Sporadic sightings continued throughout the country until the turn of the twentieth century. Usually these incidents followed the template set down during the initial attacks: a masked or helmeted figure appearing seemingly out of nowhere with the apparent intent to terrify, grabbing and/or molesting the victim, then springing away over a wall or hedge. A number of copycats were sought by the police, arrested and a few convicted for overt SHJ attacks or for mostly unrelated ones that happened to fit in some way with the popular SHJ narrative. No actual, verifiable, “real” Spring-heeled Jack was ever caught or identified.

Mike Dash wrote a very comprehensive paper about Spring-heeled Jack, if you’re interested in reading more about the subject. He seems to be one of the only people to actually go back to primary, contemporary sources and do some sensible research, instead of  just regurgitating half-remembered Big Book of the Supernatural anecdotes.

Dash also wrote a really fascinating and entertaining book called Tulipomania a few years ago, about the eponymous craze and ensuing financial bubble that resulted from tulip bulbs becoming a hysterically sought after commodity in the 17th century. His blog is good, too.

Get your spring-heel ‘Jacks’ here, boys! Only 22’6. Ideal for a evening of hiding in the bushes and sexual assault. (Eyes like glowing coals from Hell not included.)

Another strange and excessively complicated competition from Eagle, dated (top right) 2 July 1960. The Modern Cooking Promotional Committee (i.e. a consortium of British cooker manufacturers) went to the very limits of creative and lateral thinking when they came up with this competition that requires adolescent boys to identify nine cookers. Thrilling. I never met a twelve year old who’d willingly spend an hour naming cookers, and I doubt a boy of 1960 was much different. Of course the boys don’t win a cooker– boys don’t cook, silly. The cooker’s obviously for mother. The competition pragmatically acknowledges that the gender roles of the time mean that a boy is unlikely to know or care anything about ovens or cooking (“ask mother to help you”), and yet still they plough on regardless with asking him to hang around in electricity showrooms checking out hobs, and to opine on his top four most sought after features in a modern automatic electric cooker. My top four–in order of importance– are Cooking Results, Safety, Large Grill and Oven Light. See, it’s fun, cookers are exciting.

It’s also a bit mind boggling to think that there were at least nine manufacturers making cookers in the UK, i.e. that the UK was a thriving industrial economy at the time. Even the decaying hulks of old industrial buildings in cities throughout the country still don’t quite drive home that fact in quite the same way this silly competition does. You may also have noticed that one of the cooker companies is Falco.

Sometimes a fellow just wants to wear a massive wig and hang out with bikers. Nothing wrong with that. But nearly a quarter of a century has  still not weathered this one hit wonder into anything other than the third worst thing to come out of Austria in the 20th century after (#2) Arnold Schwarzenegger and (#1) Adolf Hitler.

Shakespeare does his best ORLY? pose in doublet and hose, therefore your argument is invalid. Somebody alert knowyourmeme.com: pre-internet image macro from Eagle, 1963.