To put down roots, to rediscover or fashion your roots, to carve the place that will be yours out of space, and build, plant, appropriate, millimetre by millimetre, your ‘home’: to belong completely in your village, knowing you’re a true inhabitant of the Cévennes, or of Poitou.

Or else to own only the clothes you stand up in, to keep nothing, to live in hotels and change them frequently, and change towns, and change countries; to speak and read any one of four or five languages; to feel at home nowhere, but at ease almost everywhere.

* To a previous section about the supposed utopian, idyllic lifestyle of living in a French village.

I’ve noted before that this blog now has so much content it’s able to keep on rolling along without me, and more or less regardless of whether I post anything or not. I’m always conscious, though, of when I’ve left a considerable gap. Throughout September and October I’ve been working and travelling, travelling to work, doing what I’ll call for lack of a better term my day job, which is being an artist, performer and writer. Some bloggers would turn this into a huge quantity of filler for their site, but personally I prefer to be present and really live it instead of always seeing and doing everything with “I’m blogging this” glasses on.

Which is a long-winded way of saying that this quote from the book I had with me during this peripatetic period will suffice as an explanation of where I’ve been. It serendipitously summed up what my life has been like over the past ten years, and especially this autumn. Far from being nostalgic or false, the second paragraph quoted here is me, absolutely. Even the four or five languages part, I’m afraid. It’s not as cool as it might sound– in fact it can take a huge toll on your relationships and your health, but it’s true nonetheless. My book Career Suicide covers this kind of stuff in much more detail, if you’re at all interested.

“Why worry so much about the future of a doomed world?”

A delightfully nihilistic quote attributed to physicist J. Robert Oppenheimer, one of the main architects of the Manhattan Project and of the first atomic weapons, although it’s probably apocryphal. It seems to originate in French from Michel Houllebecq’s book H.P. Lovecraft: Against the World, Against Life. The English translation of Houllebecq actually mentions in a footnote that the quote is untraceable.

Houllebecq is, shall we say, a not uncontroversial writer who may conceivably be projecting his own profound misanthropy and negativity onto Oppenheimer; Lovecraft’s, too. Even so, it’s in character for a man who made it possible for the human race to render itself and most other life on the planet totally extinct within a matter of minutes.

The temptation of avarice. French edition of Ars Moriendi, 1465.

Ars Moriendi (The Art of Dying) was a book that appeared in many editions across medieval Europe. This image is from a block-book edition, i.e. the words and pictures were each carved on the same wooden blocks instead of the text being set in futuristic movable type.  The demons appear to be tempting the man with visions of a new 1465 model executive horse, a nice hat, a big house with glass in the windows, and a wine cellar… though surely they’re too late if he’s on his death bed already? Step into my office, imps of Satan; your efficiency and the timeliness of your communications are severely lacking.

Seven hundred years on, this is looking a bit Muppety to me and reminding me of Labyrinth, especially the profoundly unscary demons. If David Bowie’s Goblin King get up of tights, codpiece and joke shop wig were shown here, that would be terrifying.

“The harmony of overwhelming and collective murder” 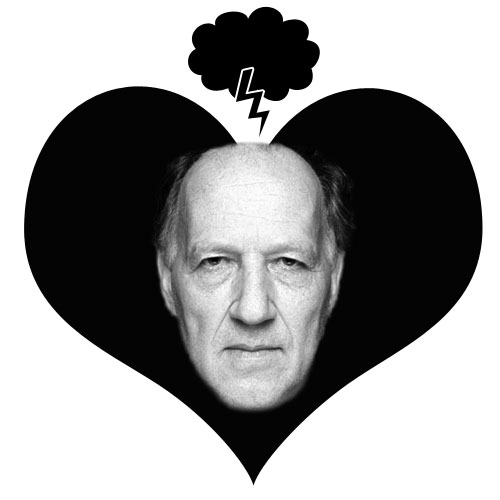 I’ve mentioned before that I absolutely love Werner Herzog. Not so much his films, especially not his dramatic ones. What I love is his Nietszchean, über-miserablist persona as demonstrated in his documentaries and also shown beautifully in the video below about the making of his film/descent into madness/love-hate platonic affair with Klaus Kinski, Fitzcarraldo. I just find Herzog hilarious, especially having heard him talk about yoga or celebrities with the same carefully sculpted loathing as he expresses here for nature: “The trees here are in misery, the birds here are in misery. I don’t think they sing, they just screech in pain.”

Apologies for any whiplash injuries induced by me going straight from Chocolate Disco to one of the artiest art films of the Nouvelle vague, L’Année dernière à Marienbad (Last Year at Marienbad), a film that it’s right to regard as one of the art films that gave art films a bad name in the view of some people. To those who love it, it’s an endlessly enigmatic, crystalline puzzle that almost exists outside of time even though it’s also very much of its time. To those who hate it, the film is infuriatingly pretentious, maddeningly French, an interminable screen saver, a bore, celluloid laced with Tramadol.

I’m in the former category. Like a weirdo I watch this film without fail every few months or so and I always feel the way I imagine some people do going to church. To me, spending time with this film is akin to a form of communion or meditation.

Obviously it brings out the pretentious twat in me as well. I can only apologise for the previous paragraph.

The film’s three main characters are unnamed diegetically, but in the credits and the screenplay they’re given the tellingly algebraic names A (the woman, played by the beautiful Delphine Seyrig), X (the man, played by the beautiful Giorgio Albertazzi) and M (the second man who has some kind of hold over A– marital or otherwise– played by the cadaverous, almost Karloff-esque Sacha Pitoeff). One day I’d like to do a screening of it where the audience is all in evening wear, smashes glasses, wraps themselves in boas, throws shoes and exclaims “Laissez moi!” (etc) along with it, like a miserablist version of the Rocky Horror Picture Show.

L’Année dernière… revolves around a nominal plotline of X attempting to convince A that the two of them had some kind of relationship, an affair that A either affects not to remember or genuinely doesn’t. And that’s pretty much your lot as narrative goes: all else is mathematical games reiterated conceptually, cinematically and literally as X and M play through and sublimate their rivalry and aggression into a version of the incredibly ancient game of Nim. Formally dressed people carouse listlessly in baroque, mirrored rooms or freeze in place like automata whose clockwork has run down. They have conversations that don’t match the movements of their mouths. They carouse constantly but never get drunk. They visit the shooting range and the spectre of violence– sexual and otherwise– keeps bobbing up as a possibility, only to be thwarted in what seems like a deliberate and perverse opposition to Chekhov’s rule of the gun in storytelling: “If you say in the first chapter that there is a rifle hanging on the wall, in the second or third chapter it absolutely must go off. If it’s not going to be fired, it shouldn’t be hanging there.”

This film is full of Chekhovian guns that either never go off, or go off in some kind of bizarre many universes quantum physics Schrödinger’s box superpositioned way- they go off and they don’t, A really did have an affair with X, and she also never met him before, and M killed her, and X is a nutty, fantasising stalker who’s trying to brainwash and manipulate a mentally unstable woman with memory problems, and she left M for another man, and perhaps everybody here is already dead anyway. END_OF_DOCUMENT_TOKEN_TO_BE_REPLACED

Something is very wrong with our world when a man who sports a hat with little devil horns as day wear talks more sense than some politicians either seeking election or actually in government. Founder of the “Church of Satan” [sic] Anton Szandor LaVey’s ‘Eleven Satanic Rules of the Earth’, 1967:

1. Do not give opinions or advice unless you are asked.

2. Do not tell your troubles to others unless you are sure they want to hear them. END_OF_DOCUMENT_TOKEN_TO_BE_REPLACED

“In the plane, you died… do you remember that?”

I’ve been listening to a set of CDs called Okkulte Stimmen [“Occult Voices”]: Recordings of unseen intelligences 1905-2007. As the name suggests, it collects audio by spirit mediums and paranormal investigators of supposed ghosts, poltergeists and possessions. If you’ve read much on parapsychology or the occult, you’ll probably have seen reference to several of these cases and the fact that recordings exist of them even though they’re rarely heard. Actually listening to them is a revelation. It’s abundantly clear why partisans and believers of the paranormal generally don’t encourage or facilitate anybody hearing with their own ears what should be primary evidence: most of the recordings are absolutely bloody ridiculous. A good number of them document blatant fakery that wouldn’t convince anybody who wasn’t already deluded beyond any capacity for rational assessment, and operating on pure faith. On several of the Okkulte Stimmen recordings people can clearly be heard giggling in the background as the supposed “spirit rapping” or possession takes place. END_OF_DOCUMENT_TOKEN_TO_BE_REPLACED

“Our Earth is degenerate in these later days; there are signs that the world is speedily coming to an end; bribery and corruption are common; children no longer obey their parents; every man wants to write a book and the end of the world is evidently approaching.”

From an Assyrian clay tablet, circa 2800 BC. The Assyrian Empire’s capital (Nineveh, now gone but the site is adjacent to modern day Mosul in northern Iraq) was captured over two thousand years later by a loose alliance including Babylonians, Cimmerians and Scythians. We should all be so lucky as to have our civilisation take so long in (supposedly) degenerating. Ashur-uballit II held onto one last city as a bastion of Assyrian culture for a while, but the empire was finally overcome in its entirety by Babylon in 605BC. The empire ended and was replaced by another, but the world didn’t end. Some useful perspective for all the middle aged-to-elderly whiners who say the world isn’t what it used to be, that the interests and recreations of young people don’t bear comparison to those of one’s own youth, or that basically everything has turned into a load of shit since they were young.

On the other hand, I totally understand my anonymous Mesopotamian colleague’s exasperation at everybody thinking they can and should write a book. Knock that shit off, nobody wants to read your pathetic attempt at writing a novel.

The satori of Katamari Damacy

The game’s mechanics are simple. A tiny character (the Prince) pushes a sticky ball around (the katamari, which translates as something like “a clump”). The Prince’s aim is to collect any and all objects that he can keep attached to the katamari. As the Prince rolls, anything significantly smaller than the ball sticks to it. In this manner the katamari gets bigger and more able to retain larger objects, and so forth. In the various iterations of the game there’s always a fairly perfunctory storyline to justify in some vague way the Prince’s various missions. These make even less objective sense than Japanese narratives normally do, but they usually revolve around some kind of silly but vaguely Oedipal crisis precipitated by the Prince’s father, The King of All Cosmos (i.e. God).