See the first post about Japanese kamishibai (paper theatre) for more information and commentary about the origins and context of these images.

Here we move into the 1940s, WWII and the dodgy, overly-positive world of propaganda. Propaganda is almost by definition absurd and deceptive; if it wasn’t so cognitively dissonant and detached from observed reality then we’d just call it informative or documentarian. But there’s still something particularly disturbing about the hijacking of a medium intended mainly for children. The slides shown here are from How to Build a Home Air Raid Shelter and from Kintaro the Paratrooper. The latter is a militaristic rewrite of the traditional story about Momotoro the Peach Boy, who joined up with animal friends to defend Japan from invading demons. You can see what they did there, obviously. 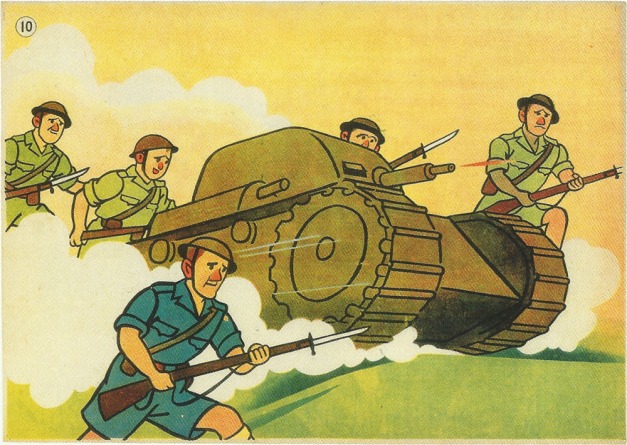 Kintaro the Paratrooper. Here come the British soldiers. Their tank seems a bit wee, but perhaps that’s intentional. I’m British but I still can’t really object to this racist caricature of us with our stupid shorts and our sunburned ears and noses. Stereotypes all have an original. 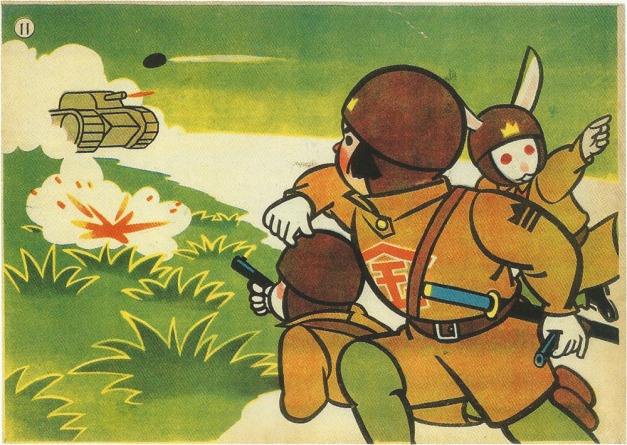 END_OF_DOCUMENT_TOKEN_TO_BE_REPLACED

The last scans for now from an excellent but sadly out of print book called The Public Notice. The Channel Islands, including Jersey, were the only part of Britain occupied by the Germans during World War II, from summer of 1940 until May of 1945. Even though the Channel Islands are some distance away from mainland Britain, they’re technically spoken of as being among the British Isles. These proclamations (both 1941) give some intimation of a nightmare scenario where the Nazis won and the rest of Britain fell permanently to the Third Reich; a place where a man would be summarily shot for releasing a pigeon or chalking a V onto a wall.  As in all the other occupied territories, in the Channel Islands there was resistance both passive and active; there were also people who eagerly availed themselves of the opportunity to snitch and collaborate offered in the second notice below.

For those who didn’t know or realise it already, the real and occasionally fatal practice of signifying that resistance was alive in conquered Nazi territory by defacing walls and official notices with a V sign– for victory, as demonstrated by Churchill’s fat little fingers– is the direct source of its use in Alan Moore’s V for Vendetta, and in the considerably less subtle Nazi allegory (less subtle, in fact, to the point of not being an allegory at all) of the original, cheesy, shoulder pads and rubber lizard mask 1980s V. 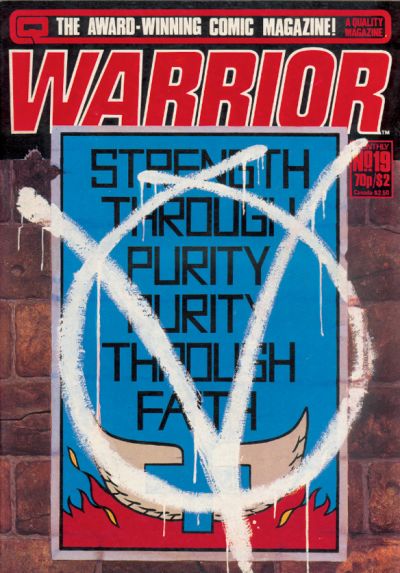 V for Vendetta. Even though I think Anonymous is generally a good thing, won’t you all join me in trying to forget the film version ever happened? Holy Dick Van Dyke in Mary Poppins, preserve us from the Wachowskis’ tin ears for British speech and culture. 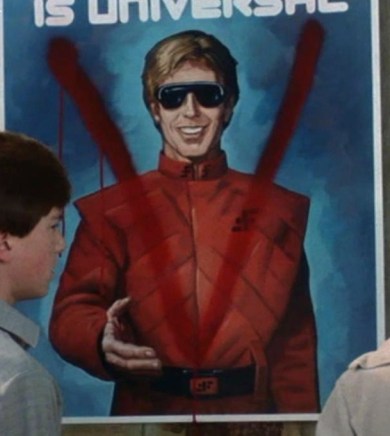 V. Hide yo hamsters, hide yo guinea pigs, cuz they eating all yo rodents.

Control panel and plugboards of the British Colossus computer, 1944. It was not programmable, had 2500 vacuum tubes, and it had only one hardwired purpose and algorithm: to crack the encryption of Germany’s Enigma machines, processing up to 5000 characters per second. Based on the work of mathematicians and cryptographers such as Alan Turing at the top secret Bletchley Park facility, the ability to break German codes was one of the factors that eventually turned the Second World War in favour of the Allies.

Another notable thing about this photograph is the strangely timeless/time traveller style of the woman on the left. I think she could walk down the street anywhere in the developed world at any time between about 1930 and 2030 and look like she belongs there.

END_OF_DOCUMENT_TOKEN_TO_BE_REPLACED

Bashful, Dopey, Grumpy, Happy, Sleepy, Sneezy, and the worst little fella of them all, Nazi.

Two of Adolf Hitler’s favourite movies were Snow White and the Seven Dwarfs, and King Kong. He chattered nerdily and constantly about King Kong for days after it was screened for him at the Chancellery. He also enjoyed whistling the Disney tune Who’s Afraid of the Big Bad Wolf? Hitler was a bit obsessed with wolves, and was undoubtedly very well aware that whistling this tune was some creepy shit. “Adolf” derives from “Athal” (noble) and “Wolfa” (wolf). One of his early aliases was “Mr Wolf”, and he surrounded himself with Wolfshunde (Alsatians/German Shepherds). His French HQ was named Wolfsschlucht (Wolf’s Ravine), a Ukrainian one was Werwolf.

PS: While Hermann Göring was staying at the Ritz in occupied Paris, the corpulent Nazi asked Coco Chanel to design some women’s gowns in his very large size. This was to help him “relax”, apparently. Not that there’s anything wrong with men wearing dresses, of course, although some men (including other leading Nazis) were summarily murdered or sent to concentration camps for similar so-called “perversions”. But it’s certainly, shall we say, an arresting image: a big fat genocidal war criminal kicking back with the latest copy of Vogue and choosing couture dresses for himself while the world’s most destructive and total war ever rages around him. Sort of like a grisly mashup of Inglourious Basterds with Sex and the City.

The Ace of Locks

Le jeu de Marseille is a Surrealist variation on the conventional deck of playing cards. It was created by a group of artistic refugees awaiting evacuation from France in late 1940. The group included André Breton, André Masson and Max Ernst. While they waited in Marseille (hence the name) for their exit visas, one of the ways they took their overactive minds off of the matter at hand– apart from drinking– was to reconfigure the traditional card game using icons more suited to the Surrealist mindset.

The four suits became black locks (representing knowledge), black stars (dreams), red wheels (revolution) and red flames (love). The court cards were transformed into Maguses, Sirens and Geniuses. I don’t know whether it’s odd or deliberate that these people were mostly Frenchmen fleeing the Nazis and yet their replacement for the court is heavy on the Germans.

I think I first read a passing reference to le jeu de Marseille in a book about the structuralist literary micro-genre of Oulippo. As with all of my HD detritus posts, I no longer have much recollection of why I collected as many images of the cards as possible, even though I did it as recently as 2010.

END_OF_DOCUMENT_TOKEN_TO_BE_REPLACED

The death’s head and the fez

I think the internet has rewired my brain. Nowadays when I’m reading a book (you know, the things made of bound paper), I’m constantly distracted by passing references or random facts because some part of me immediately knows I could look it up. One recent example occurred while I was reading about Jewish/Zionist terrorism in Palestine after WWII, which was mainly focused on forcing the colonial British to leave. There was a fleeting mention that the Mufti of Jerusalem had been involved in recruiting Muslims into the Nazi SS. Obviously there’s “the enemy of my enemy is my friend” to consider, but Nazi Muslims? Outside of the crazed, ignorant, hateful imaginations of certain Republicans in the US, I mean?

It’s true. The 13th Waffen Mountain Division of the SS Handschar didn’t actually operate in Palestine, but they were mostly recruited in 1943 from Bosnian Muslims to fight on the Axis side against Yugoslav partisans. A combination of naive orientalism, pseudoscience and the good old standby of Nazi hypocrisy allowed Heinrich Himmler to convince himself and his racist idiot cronies that Bosnian Muslims fit into the nonsensical genealogy of the so-called Aryan race. They definitely had nothing to do with Slavs, oh no, definitely not. The hardline Mufti of Jerusalem, Mohammad Amin al-Husayni– fairly indiscriminately opposed to the British and to Jews no matter where they came from– was brought in to convince and legitimise Bosnian Muslims into defying their own Islamic clerics, who had expressly  and unanimously (and wisely) forbidden their communities from getting involved with nationalist causes or the Nazis.

In common with all their other Schutzstaffel colleagues, the 13th Waffen distinguished themselves mainly for their indiscriminate brutality both in battle and against unarmed non-combatants. In this case it was mainly Serbian civilians who bore the brunt of war crimes that were punished afterwards with executions of the perpetrators. And of course, much like the rest of the SS with their Hugo Boss uniforms, the horror of what they did was somehow accentuated by the fact that they always turned up for mass murder, genocide and hatred immaculately styled, covered in logos… and in the case of the 13th Division, wearing a fez. 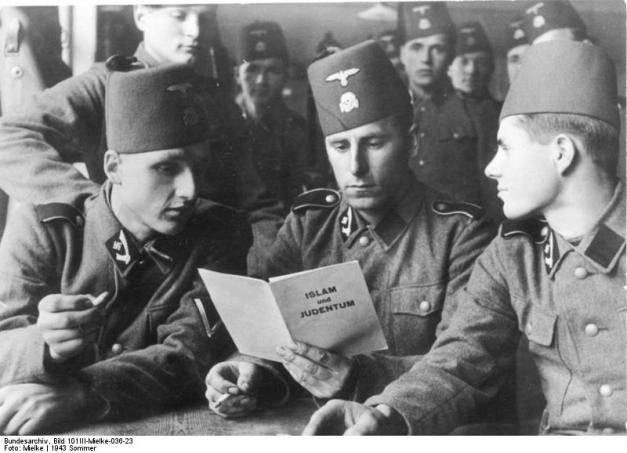 Members of the 13th Waffen Mountain Division of the SS. You can probably work it out for yourself, but the pamphlet they’re reading is ‘Islam and Judaism’.